For 215 years the Ince family have been crafting umbrellas for the home and overseas markets; making us the oldest umbrella maker and manufacturer in the UK. The company is still based a stone’s throw away from our first beginnings in Spitalfields, just around the corner from Liverpool Street Station, London. And the Square Mile is still one of our biggest markets where we supply many professional firms and businesses.

Richard Ince is the 6th generation Ince managing director of this old East End family business. He prides himself in having worked in the business since a teenager, learning his craft from the skilled artians around him; ensuring these same traditional skills are handed down through the generations and are still being used today to make quality hand crafted James Ince umbrellas.

Our oldest piece of history is William Ince's accounts book dated 1836-1843 held in the Library at Bury St Edmunds, Suffolk. This details the umbrella and tailoring orders William Ince was taking at his premises in the town of Clare, Suffolk. As well as his financial dealings between himself and Samuel Ince based in Montague Avenue (now called Old Montague Street), Spitalfields London. The Bishopsgate Institute has collated an archive of key documents of the company from 1871 and added them to its collections - Bishopsgate Institute Archive. The business has occupied a number of addresses in the area over the years including:- No 64 Bishopsgate Without - later renamed as 232 Bishopsgate, next door to the Bishopsgate Institute. 37 Spital Square now occupied by SPAB - the society for the protection of ancient buildings, and 26-27 Norton Folgate in Shoreditch.

The Gentle Author of 'Spitalfields Life' has written several articles about our umbrella making business and the people who work(ed) with us. Please follow the links below to read more. We have also created a media page to collate some of the more interesting articles about us. 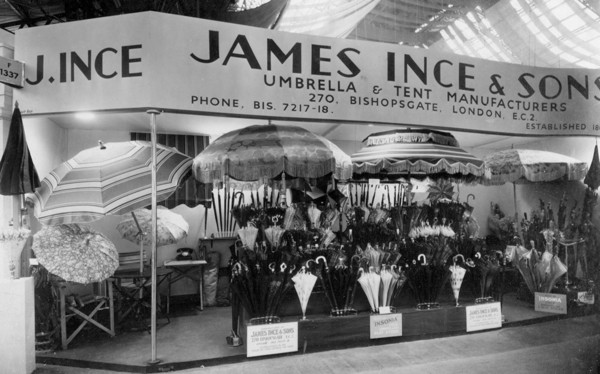 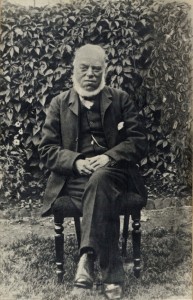 James Ince b. 1816An early date for members of the Ince family selling and repairing handmade umbrellas and parasols; predominately in the London and Suffolk markets. Farmers and the clergy were early users of Umbrellas from the 1770’s onwards.

George Ince (aged 13) moves to Spitalfields London followed by his three brothers - William, Elisha and Samuel - and together they develop their parasol and umbrella businesses. They joined relatives already living and working in Spitalfields to earn a living.

1836 is the date of William Ince's account book detailing the umbrella and tailoring orders he was taking at is premises in the town of Clare, Suffolk. It also details financial dealings between himself and Samuel Ince based in Montague Avenue (now called Old Montague Street), Spitalfields London. This accounts book currently resides in a Suffolk County Library at Bury St Edmunds.

The first viable steel rib for Umbrellas is invented by Samuel Fox in Yorkshire, enabling the industry to move away from using whalebone. This made Umbrellas lighter and cheaper. A  great benefit to the Ince businesses who were able to capitalise on the umbrellas’ increased desirability.

The partnership between the Ince brothers is dissolved and a new company in the name of James Ince and Sons is formed.

Our oldest archive is a price list for many incredible items. This includes the ever present Carriage Umbrella which we still make, though the usage has changed from carriages to doorman  escorting guests to their vehicles; hence its current industry name of Doormans’ Umbrella.

The business moves to 64 Bishopsgate Without. Today these premises now stand next door to the Bishopsgate Institute.

Ernest Edward Sears joins the firm as a director.

64 Bishopsgate Without circa 1900James Ince & Sons by this time has expanded into tents and shelters. The most prestigious of which was ‘The Villa’, a much loved Victorian bathing tent. This was in demand both home and overseas where stores such as Harrods and the Army & Navy sold it through their catalogues.

The company registered the trade mark 'Insonia', and it was used extensively on our products through to the 1980's.

Bishopsgate was widened and re-numbered into one single street and 64 Bishopsgate Without became 232 Bishopsgate.

Wilfred Sears Ince joins the business to work alongside his father Samuel George Ince and his Uncle Edward Sears.

The business moves to 26-27 Norton Folgate, a larger premises which enables more staff to be taken on and a much wider range of tents and shelters to be made. This coincided with a growing demand to supply the forces overseas through the newly formed NAAFI. With  our tents, shelters and umbrellas being used in Burma, Ceylon, India, Singapore etc.

The building was commandeered by the railway for modernisation purposes so in 1937 a move had to be made back to Bishopsgate to number 270. 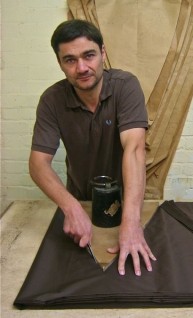 Richard Ince at the cutting bench 2011. This process has remained unchanged for centuries. The underside of the bench still has blitz soot on it!Incendiary bomb devastated the premises so a quick move had to be made to 298 Bishopsgate.

Increasing mechanisation to the industry brings Umbrella prices down. Export trade is still good, particularly to the colonies.

A company Souvenir brochure was printed on our 180th anniversary. This year also saw the company move out of the City to bigger premises at The Oval, Bethnal Green; a benefit of good trade both home and overseas - with the promotional golf Umbrella proving very popular throughout the 1980’s and 1990’s. The old building at number 270 Bishopsgate being taken over by the first Spitalfield market developers.

Richard James Ince takes over the running of the business to become the 6th generation managing director.

A larger more comprehensive history of the company and the changing face of London was printed by the Bishopsgate Foundation, titled ‘Two Centuries of an East London Family Business'.